when recognizing how fortunate we are

We convince ourselves that there’s a single point

in our own personal history that our life changed

(for the better or for the worst)

But let’s suspend the rules

Let’s offer the responsibility up to a force greater than our own.

We convince ourselves that things happen for a reason.

As intellectuals, we accept the premise of cause and effect.

…and we convince ourselves that we can take measures to prevent

Be humbled.  Accept that we don’t know!

Not knowing IS ignorance,

But ignorance doesn’t need to be blissful.

The bliss comes from not caring.

But the bliss can come from gaining knowledge.

The bliss can come from the release.

The release of defeat.

The release of deceit.

The release of something sweet.

…the knowledge that comes from wisdom

…the wisdom that comes from an awareness

…and the awareness that what we know to

Beware of the dream makers!

They may deliver on the dream,

But can not guarantee the reality 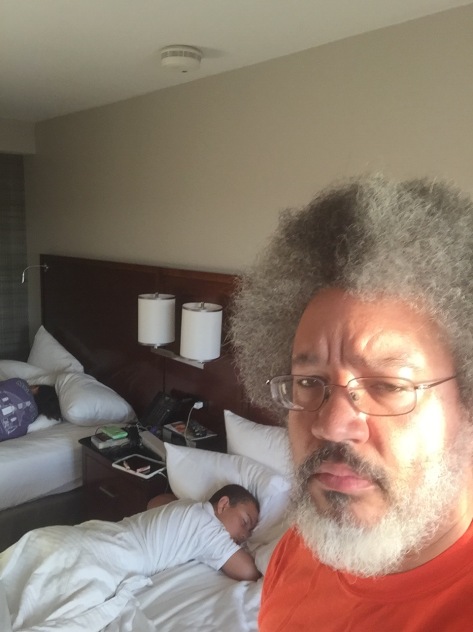 Rise and shine, and give God the glory, Glory…

And inhale the air outside

each and every soul

That is in our lives

I pray He protects each of us

That He keep us

That He humble us

Where are you now?

It’s 5am.  I’m not calling.  There’s nothing left to say.  I’ve deleted the contacts, removed the tags, archived the letters, and folded the dirty rags.

It wasn’t a lie.  Now I know.  The deception was not my own.  The reflection was joint endeavor–a partnership. It was an illusion–a magic trick at best.  But it’s been said that just because it’s magic doesn’t mean it’s not real.

It’s realness permeates my soul.  My healing is in real time. It’s 5:30am.

The light comes through the window of this hotel room of mine. It’s not the Weston, but a different frame of mind…

This time my children sleep next to me.  In a few hours, I’ll leave them behind as I go to facilitate change.  In the fantasy we created, I would lead a reform movement. Now I realize that I am the reform.  Before one can lead, one must learn to follow.  There IS nobility in knowing who to follow.

Who will follow you?  Not I.  It wasn’t fun.  Those who followed me; they all began to run. Leadership is not about quantifying the movement; it’s about qualifying the purpose.  It’s about writing a goal down, making a plan, and taking action.  A trifecta that was never fulfilled.  ACTION…

Sometimes the reflection comes from the glare in the window.  Other times it’s the image in the mirror.  Often we see what we want to see.  Seldom we understand what is reflected back.

What I saw then was a culmination of naiveness, trust, and a desire to be obedient. Now we have greater wisdom, descernment, and an understanding. Delayed obedience is disobedience.

I’m grateful for a forgiving God.  For the God within myself is far more forgiving than the God in someone else.

The flowers never wilted because the flowers were not real.  The dreams (given away with each compliment) could never be fulfilled.  I have to laugh just a little as a smile comes across my face.

Everyone could see the truth except for the one in the mirror.

This guy was enticed by another dreamer’s armor. With its shininess and polished exterior, I was mesmerized.  I could not see the chinks in the armor or the pushed-out dents.  The evidence of previous battles was concealed.

No one else will be able to fully relate to my reflection. It’s clear that the only reflection we see in the mirror is our own. Is this why I keep fewer mirrors in my home? Do we avoid the reflection to escape the reality?

Or have we realized that even a mirror’s reflection is not real. In fact it is reversed.

Today is a great day!  Why?  Because I can count. But I can’t count high enough.  There are too many blessing to count.  I’d never be done counting.  I’d start with the fact that I woke up this morning (1).  Then I’d count the fact that my health is better than others (2).  I couldn’t overlook my beautiful and healthy family (3). I could go on and on, but it would eventually sound like I’m bragging.

I am a humble man, and in my humility I am open to a world of criticism and/or praise.  My ego yearns for positive reinforcement.  Today was no different, except for…

Today I met Linda, retired from Michigan.  While chatting with Jocelyn from North Carolina, I began to editorialize and socialize and entertain. It was beautiful!  My audience was responsive.  My presentation was edgy and relavent. My audience attentively smiled and asked for more.  We were engaged and it felt natural.

Most teachers are natural entertainers.  We are knowledgeable about social interaction and we are well versed on how to perpetuate a conversation.  We are always seeking that “teachable moment.”  It’s like a drug, but way more addictive.

Linda, retired from Michigan, was also a teacher. She knows the struggle, and she continues to advocate for our students and the conditions that current educators struggle with routinely.

She looked me squarely in the eye and said, “you should be a comedian!”  I kindly thanked her for the compliment.  And then I thought, maybe Linda, retired from Michigan, was right.

This fired me up, I told three more stories.  Career, relationships, and parenthood…these would be my topics (my comic bits). My audience agreed.  So I embellished and tweaked each real story until one man laughed so hard. I thought he was going to need a doctor.

When I began to bloggers ago, it was personal therapy and reflection.  But what better therapy is there than laughter? And I could provide a service to others???   THIS IS MY love language–affirming words and service towards others.

Why are we afraid of silence?! Why does it become overwhelming when we are alone and there is no voice around?! Why do we want to keep ourselves busy all the time?! Isn’t the soul of human beings, the soul of the universe or whatever power it is that’s running the earth and its resources present in this “silence”?! Then why are we running away from something that we eventually have to become a part of?!

Well the above few lines clearly define what being alone and silence does to me. It causes chaos in my mind, it causes bewilderment! But the good part of it is that it forces me to find a reason to get over it, because hey, it’s Monday tomorrow and I have to be focused at work.

So, I figured out reason for why we are scared of silence or rather why I am (to…

Has left us disappointed.

Everyone wants the praise.

So few earn the title.